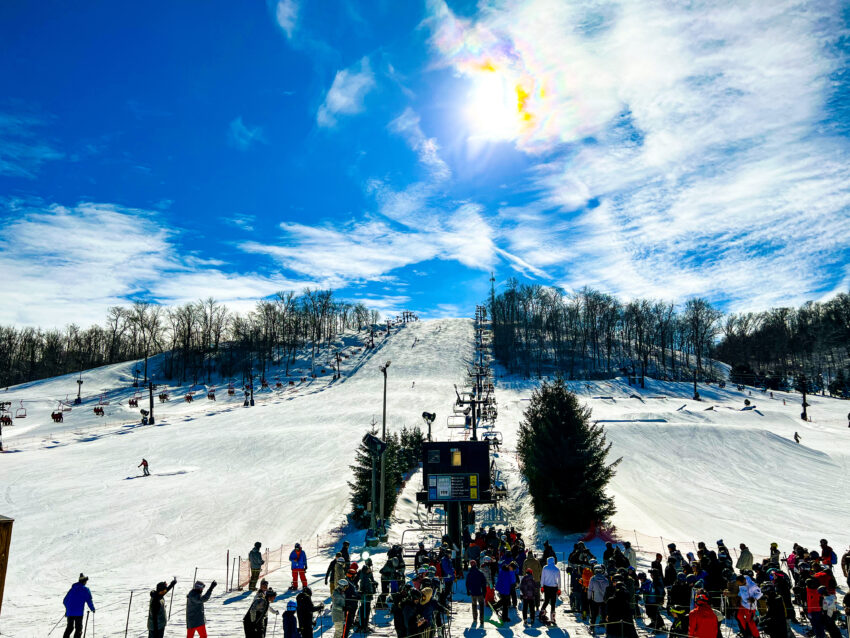 My Brazilian friend had never seen snow. I couldn’t fathom such a perspective, watching him gawk out the window of the bus that was driving us from the airport to a hotel in Switzerland.

We all lived in England, attending the same American school, though many of us were not American. It was February, and I remember doing a mental check. Surely it had snowed in England. Before England, I had lived much of my life in Michigan, and the presence of snow and coldness was everywhere there, even in the summer with all the potholes and the cracked streets.

I had just turned 13 years old and was finally making friends after switching schools. I had moved to England a year prior, in the middle of 6th grade. It had taken me almost half the school year to make new friends—after so recently making new friends at the previous school—and some of my new friends were going on a ski trip to Switzerland. It seemed scary, traveling with classmates and a couple teachers to proctor us, but I did not regret the decision in the least after seeing the snowy landscape of the mountains.

The night before the trip, I had my first kiss with my first girlfriend. We had been “dating” for two weeks and were scheduled to kiss at a dance the night before the trip. I remember my girlfriend and her friends had a huge discussion in the girls’ bathroom that made me nervous that such planning needed to take place. I stood outside with my friends, far from the bathrooms, fielding updates from the girls involved in the planning, feeling that despite the insane preparation this act required, it boded well for the future. Who wouldn’t take the time to make sure something happened the right way if you didn’t care about it?

It was a terrible kiss. It was all my fault. I was 13; I was scared out of my mind; and by the time she emerged from the bathroom, the motions of the kiss became perfunctory, textbook. Not to mention my lips missed part of her mouth, and instead of adjusting and admitting a mistake, my confidence led me to embrace the error.

On the trip to Switzerland the next day, she avoided me, and the ill omens of her non-presence became clearer by the hour. The debauched kiss became a gong of doom. Later that day, she finally gave me her attention and broke up with me.

Moments later, she got back with her ex-boyfriend. To further make this awkward for me, the only bed available in our weird hotel room of many bunkbeds was the top bunk above her ex-boyfriend. That same night, after I had climbed up on the top bunk, he started kicking up my mattress. I remember being bucked up by the kicks, vaguely understanding that this passivity I was now displaying, clinging to the bed lest I fall to the floor, was perhaps at the root of my relationship troubles. My new friends in the room ganged up to put a stop to it. An adult was eventually involved to finalize the terms of peace.

And so I vowed to throw myself into skiing and to not worry about the break-up. I’m not sure if this was entirely successful, but I don’t remember that trip as a series of post-breakup blues. Rather, I remember the wonders of skiing in Switzerland and France.

The memories exist now in small clips: me admiring the wonder of a speeding along a snowy highway of skiers going from France to Switzerland; my Brazilian friend freaking out going down a bunny hill and colliding with a snowboarder who was blowing his nose at the bottom—the white explosion that eclipsed both bodies, the scene slowly revealing itself like after a magician’s smoke; the warmth of the lodge; the laughter at how ridiculously awesome it was to be on these gigantic white mountains all day with only a curfew at the end of the day to corral us.

One of the traditions of the outfit that was taking care of our group of middle schoolers was to hang a Swiss cowbell around the neck of whoever made the biggest “oops” the day before. Out of everyone in our large group, I wore it the most: three full days.

The first day was because of the pretzel I had made of myself while putting my skis on.

I had been involved in sports all of my life, but none of them really worked on stretching. During the Presidential Fitness Test that year, I couldn’t even get to the starting line of the stretch test. You were supposed to sit down with your feet straight out and then reach forward and push a rectangular piece of plastic on top of a ruler-like measuring surface. I couldn’t even reach the plastic rectangle, my hands hovering over my knees.

When I attempted to put my skies on, I quickly found myself crumpled up on the snow, screaming, feeling muscles and tendons in my body dangerously straining. In any moment, I was going to start hearing cracks like the Pop Pop Snappers we used to throw on the ground when we were younger.

Eventually I got to the skiing. I made steady progress on the bunny slope, but instead of hijinks going down the slope, I had them coming up. To get to the top of one of the bunny slopes, you would pull down this circular shaped stool-top and put it between your legs. Then you would ride up the hill like you were riding a weird sort of swing, maybe more like a snow escalator.

One time, at the top, I was disembarking when the pommel behind me came zinging at my head—released from the skier behind me, retracting upward like a tape measure. I looked backward: a young kid stood there looking at me with the straightest face I’ve ever seen on a child. Then he was gone, down the slope.

Another kerfuffle at the lift was the reason I wore the cowbell for the second time. The culprit was a T-bar.

Instead of a pommel, you sat on the either side of an upside down “T,” the top of the letter becoming a thin bench, the stalk of the letter between two riders. Skis on the ground, you were pulled up the mountain in tandem. I rode the T-bar successfuly at least once up the mountain. The second time, my buddy got off early (or I got off late). The T-bar rotated and hooked me between the legs, pulling me yelling up a steep incline that was past the place you were supposed to get off. Both my skis detached themselves. The lift operators had to stop everything to get me.

I don’t remember what I did to get my third day of cowbell apparel, but it doesn’t matter. It didn’t change anything about the relative happiness I had in seeing a part of the world I wouldn’t see again for a long time.

My first memory of skiing was at Perfect North in southeast, Indiana, not 45 minutes from Cincinnati. I was perhaps 7 or 8 years old then. It was my first and last time skiing before my Switzerland trip. I remember watching my ex-uncle careening down one of the runs, speedy and sure of himself. It awed me after a day on the bunny slopes.

Last week, some 25 years after my one week of skiing in Switzerland, I did some skiing. I had no idea if my body still held any experience in its memory. Thankfully, at Perfect North, most of the lifts were chairlifts. No T-bars, no pommels.

Perfect North isn’t the Swiss Alps. It’s in Indiana for one. But it is a pretty dern good thing to have when you live in Cincinnati. I plowed down two runs before I started getting comfortable once again with turning, feeling at peace that I could now control my speed without plowing. I fell backward one time when some traffic limited the long swoops that helped me maintain a manageable speed. But even that one fall felt like some sort of learning improvement.

It makes me remember walking into a rock climbing gym for the first time in Nashville. I wasn’t there to climb, but I remember feeling some barrier to it. It was the same barrier I had erected for myself with skiing.

Five years ago, I grilled my cousin, a very seasoned and good rock climber, about the sport, summing up the conversation with a firm, “I will never do that.”

But within the first hour of meeting my future wife some months later, I found out one of her favorite things to do was rock climbing.

Rock climbing wasn’t love at first sight: I had developed a fear of heights in my adulthood. But I soon learned to love the thrill of figuring out a route, of getting stronger and better every day, of the camaraderie that the sport invokes. I now wish I had started rock climbing earlier in life.

Before my Switzerland trip, skiing was equally as exotic to me as rock climbing. If my new friends weren’t going, if I hadn’t felt the urge to really put behind me that new-kid loner bubble, I would have missed out. What we would miss if we did not know people that do different things than we would ever imagine doing by ourselves. Sometimes it pays to be a follower.

Even getting caught up in that middle school gaggle of match-makers orchestrating what would become a terrible but meaningless kiss was worth it. I was pushed to confront a reality that I was largely too scared to confront on my own. Despite the next-day breakup, I grew, gaining perspective.

A couple months ago, when a colleague asked if I wanted to be a chaperone for our school’s Ski and Snowboarding Club—having only skied for less days then there are in a week and almost 27 years ago—I felt that familiar hesitancy of a bubble-shattering opportunity.

I took it and have found a new future I wasn’t doing a good job of imagining by myself.